Happy June! It’s birthday month around these parts (3 out of 4 of my boys plus my husband have June bdays), so I plan on featuring some fun birthday ideas this month.

My two oldest boys have birthdays 2 days apart. Both were very into Legos last year so we did a Lego birthday party for each of them. One party was Friday night, the other was Saturday morning. Same party, but we did it twice.

Here are some of my ideas from that party. And by the way, when I throw a party my things never turn out quite as lovely as all those images you see of fancy parties on the internet. But you know what? The kids still like it. Here’s my best shot. 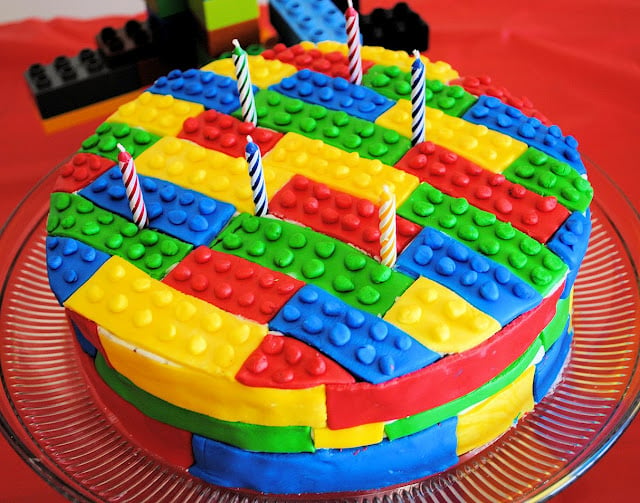 That was my first time using fondant and it went pretty well. I just used a marshmallow fondant recipe and colored it in red, green, yellow and blue and then cut it into strips and put them all over the cake to look like Legos. Pretty cool but let me just say that rolling all those tiny balls took forever and we had to do it twice since we had 2 cakes.

Here’s the invitations. I just used a 1 inch hole punch to punch all those Lego dots and then some dimensional stickers to stick them on: 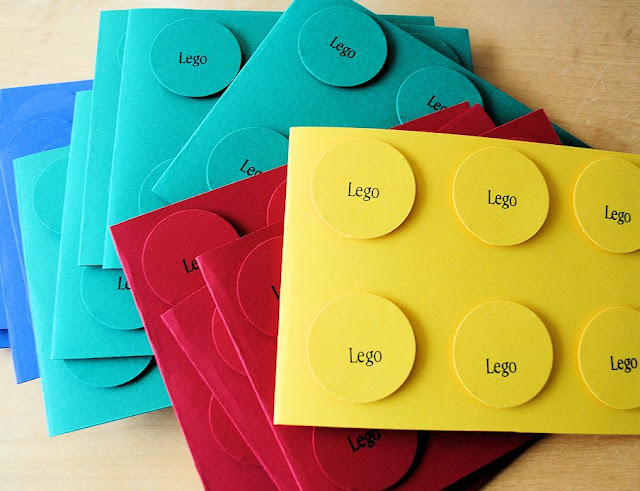 I stuck with a red, blue, green and yellow theme since those are the classic Lego colors. I got a red tablecloth and the cups, plates, napkins and forks were in those colors as well.

To hold the forks at the table? My 6 year old made a Lego holder. My boys also made other Lego creations to decorate the table. 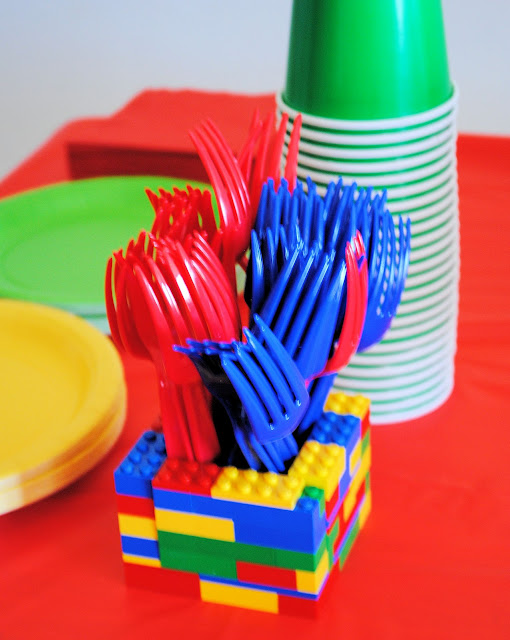 Also at the table I had these slightly dorky juice boxes that the kids got a huge hit out of: 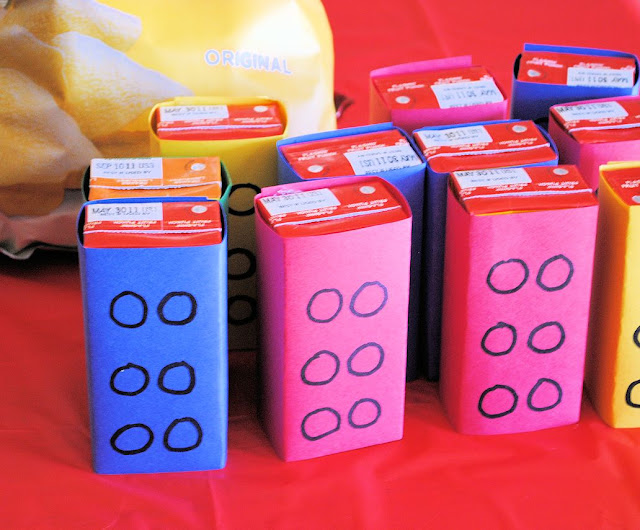 For more decorations I just cut out rectangles and glued circles on the to look like Legos and strung them up in several places. I also used red, yellow, green and blue balloons. 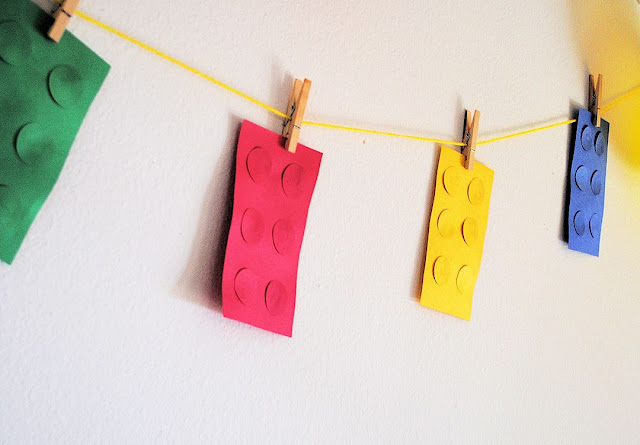 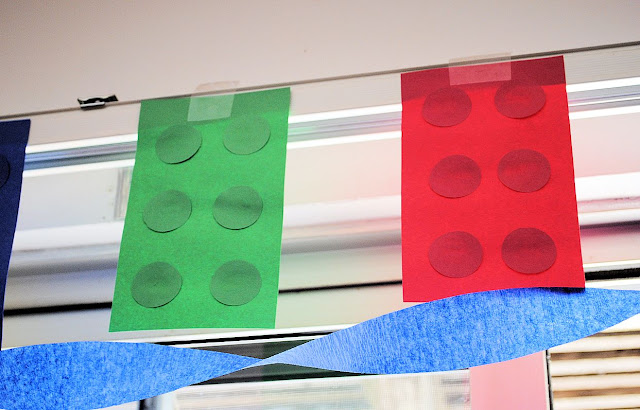 For party favors I put them in bags that were supposed to look like Lego guys. Not sure they really do, don’t laugh. But the kids thought they were cool and that’s what counts: 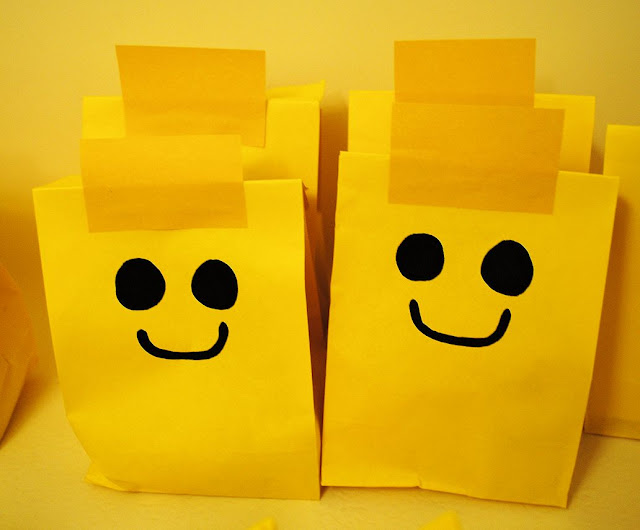 Inside the favor bags I had these. You can buy Lego candy at those candy stores in the mall or on Amazon. So cute and so perfect! Here’s a Lego Birthday Party Favors Printable that I used. Print it out and you can use it too! 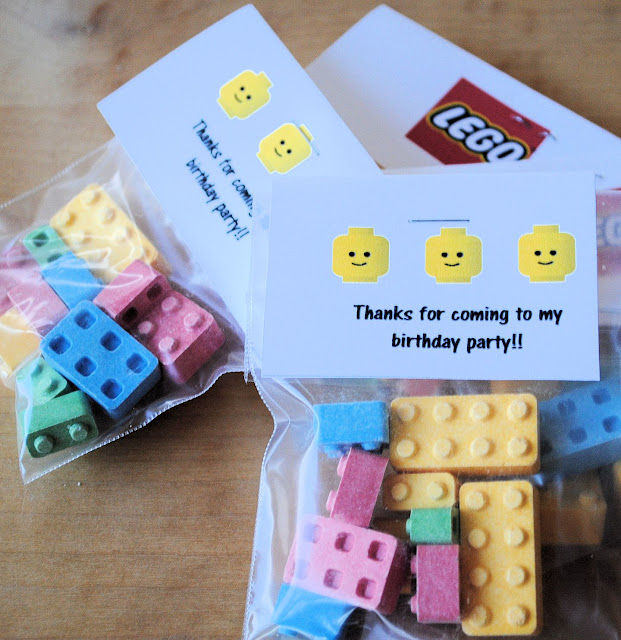 I also printed out some Lego coloring pages and made them into a small coloring book. I had a few other things in the bag that I covered with homemade Lego stickers, but I didn’t get pictures!

We also did a pinata that looked a lot like this onebut it was uglier. That’s ok though because the kids thought it was cool and they just beat it to death anyway!

The party was a big hit! 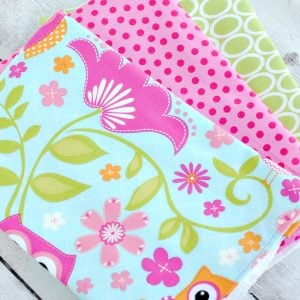 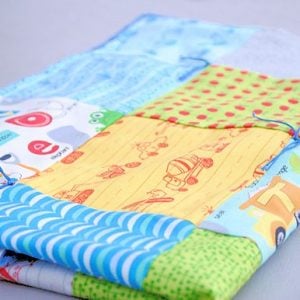 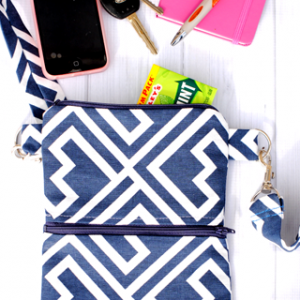 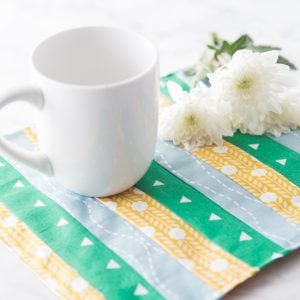