It’s time for another adorable hooded baby towel tutorial! Each month I make, and teach you to make, a hooded towel. Last month was a Ladybug and before that it was a Frog. This month? A monkey! (See all hooded towels here.) 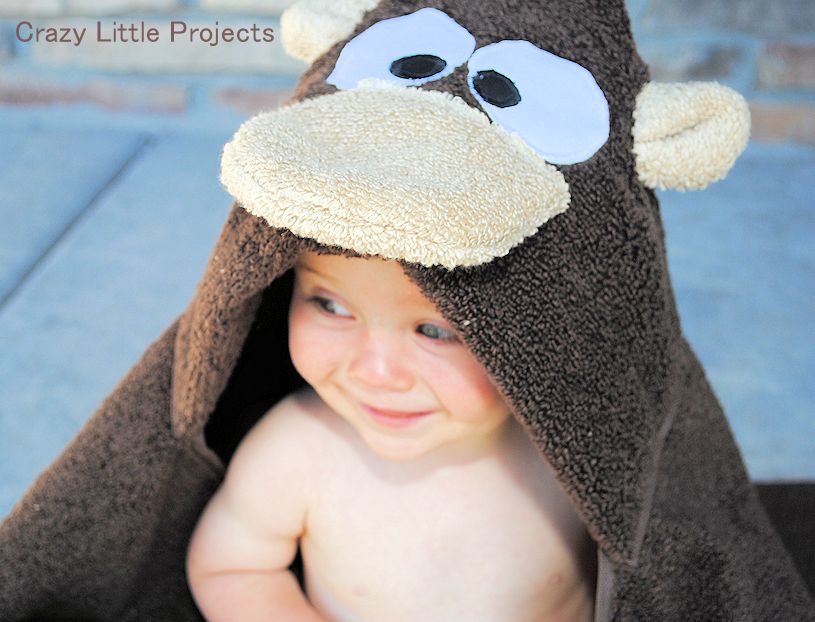 This is the first time I have done a monkey towel and I have to say, I LOVE how it turned out. At first I was worried that it might end up looking like a bear, but all the little kids at my house while I was making it could tell what it was. So I’m calling that a success!

These towels are not hard to make. They cost around $10, maybe a little less, and take under an hour. Well under an hour is you are experienced at sewing.

Instructions:
To start out, cut your brown hand towel in half hamburger way. Then fold it in about 4 inches and pin it like this: 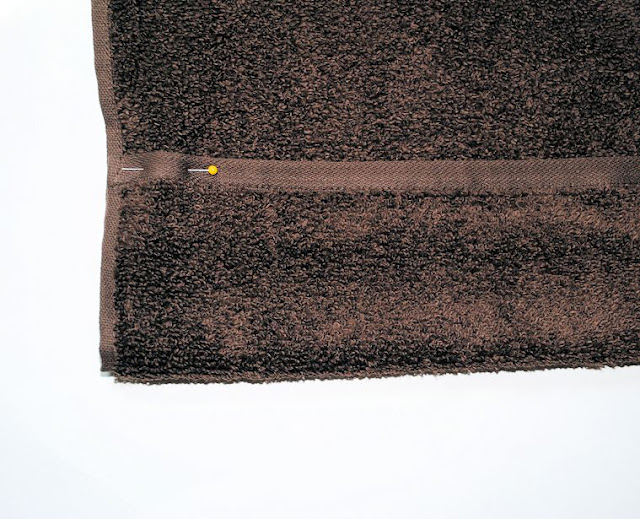 Stitch a straight line across it on the edge of the towel where you pinned it (where my yellow pin is above, but go all the way across the towel.)

Now, flip it over and work on the back of your half hand towel.

Cut out eyes. I like to use fabric that has already been attached to iron on transfer.

You need 2 white pieces and 2 black pieces. My black ones are about the size of nickels. Really you can just eyeball this. Make them as big or small as you want them.

Iron your eyes in place (or you can skip this step and just sew them in place). 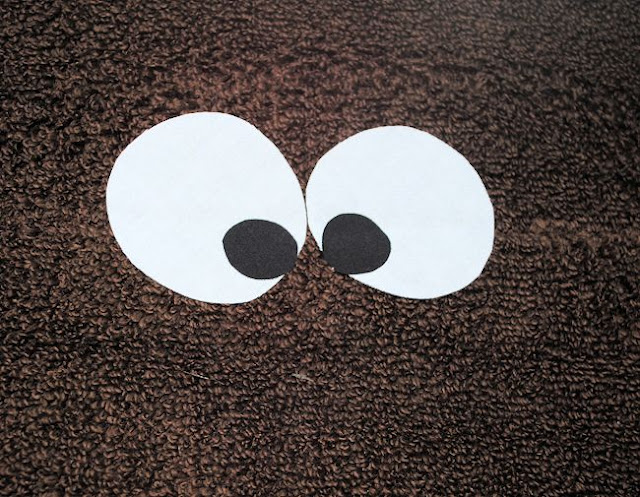 Using a tight zig zag (applique) stitch, sew around your eyes and eyeballs: 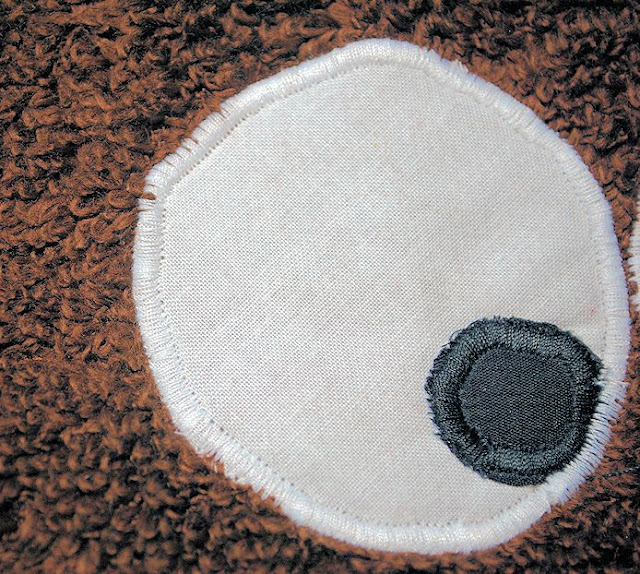 Now, with your light brown towel you need to cut out the nose and the ears. You need 2 nose pieces and 4 ear pieces. Make them basically half circles but with a little extra length on them: 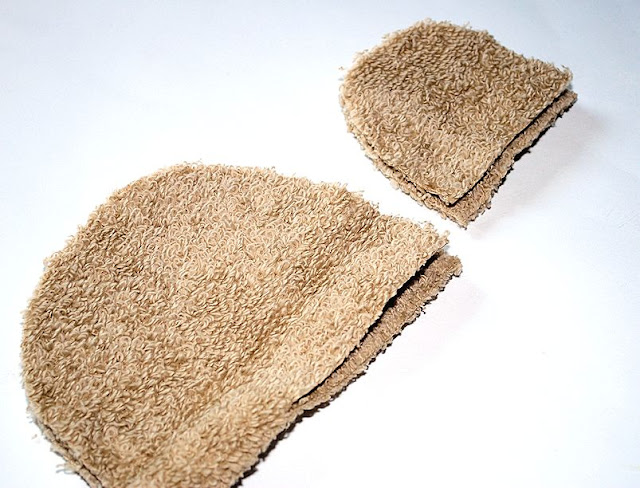 Sew around them leaving the straight edge open to turn them. Turn them right side out.

Sew your nose in place with another tight zig zag stitch: 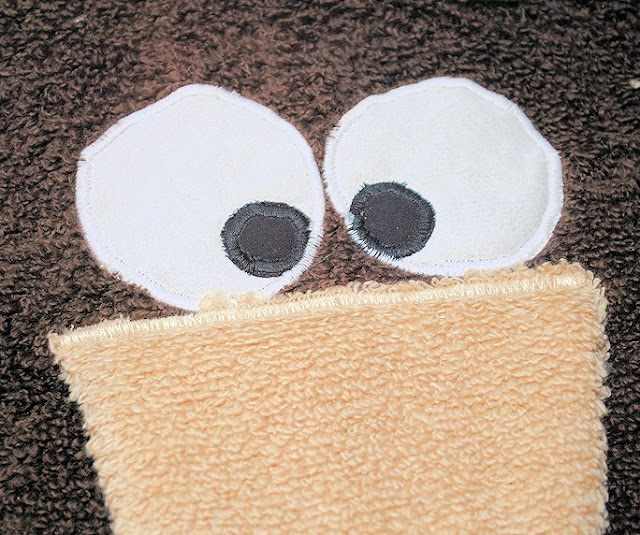 Now, for the ears, figure out where you want them and then cut a small slit through the towel. Make it smaller than the width of the ears. Slide the ears down into place. Because the slit is smaller than them they will scrunch up a little. This is good.

On the underside of the towel, zig zag your ears in place: 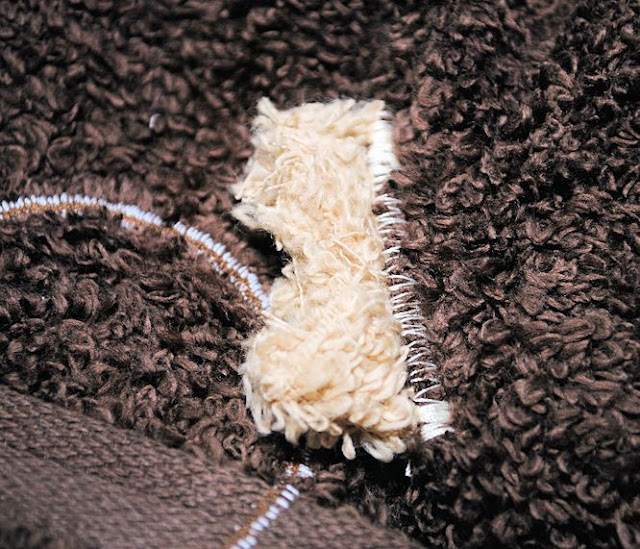 Guess what? Your face is done!

Now, fold the hooded towel in half with the face on the inside. Zig zag up the raw edge of the towel to form your hood: 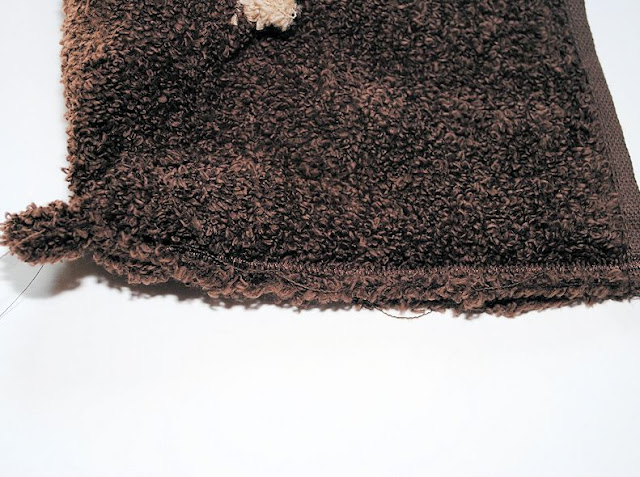 I’m going to show you this next part with my frog towel just because the pictures explain it well. Do this with your monkey. Turn it so that it looks like this: 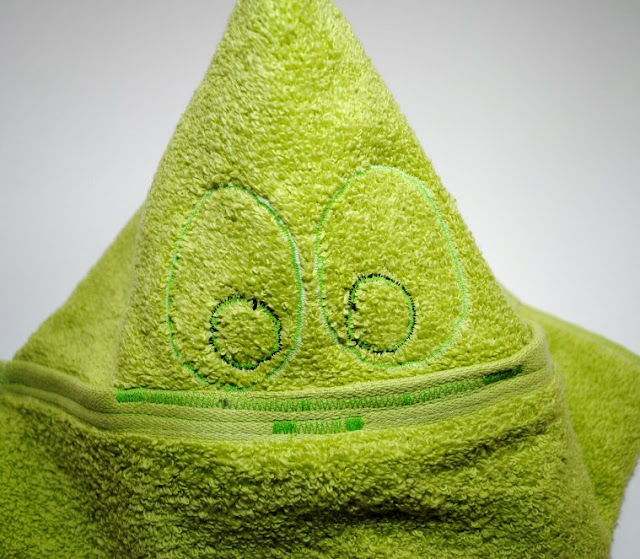 Then sew a straight line to form a triangle at the tip. Then snip off the very tip of the towel. This just gives your monkey less of a pointy head. 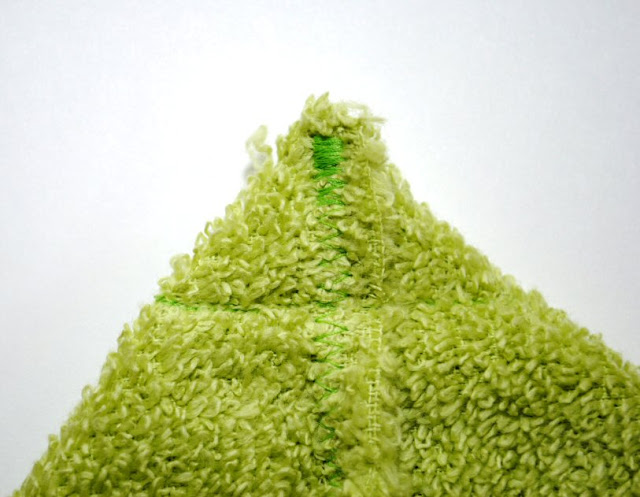 Now just attach your head to your towel. I like to make a nice little pleat in my towel: 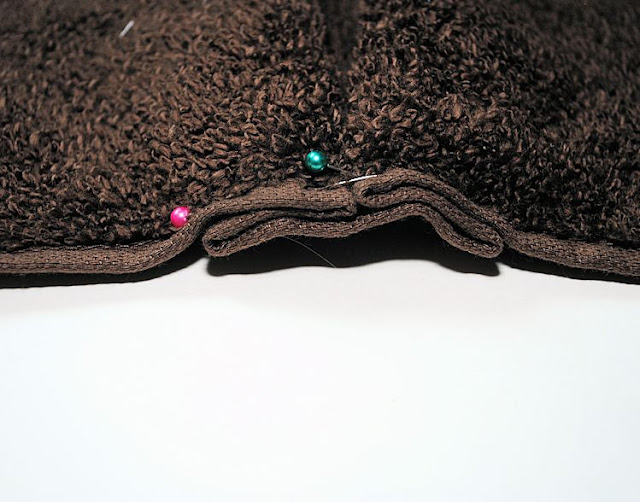 Sew that pleat in place and then zig zag your head onto your towel like this: 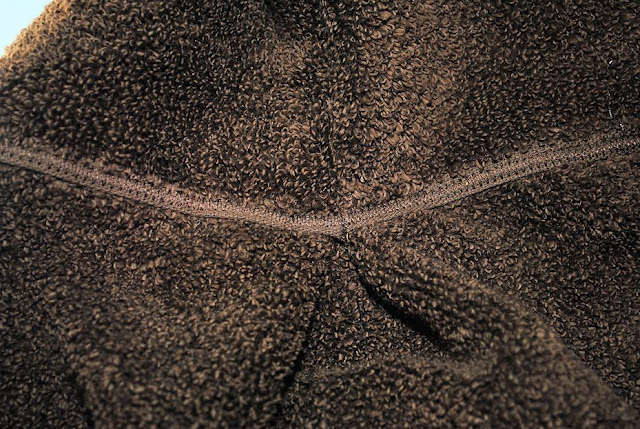 As for my model, I think he likes it! 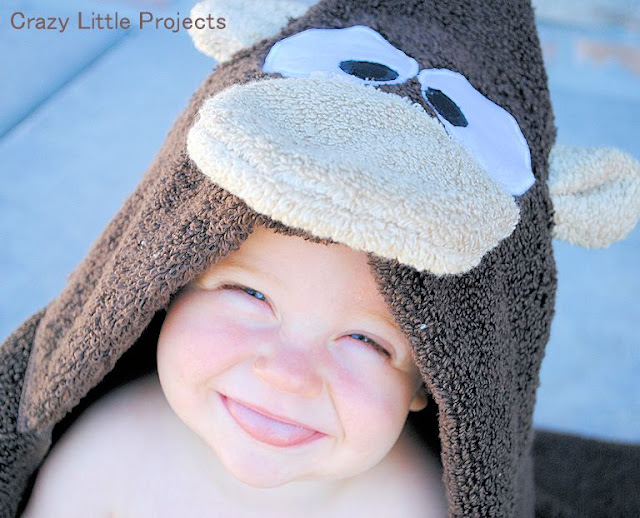 Is it just me or is he adorable? 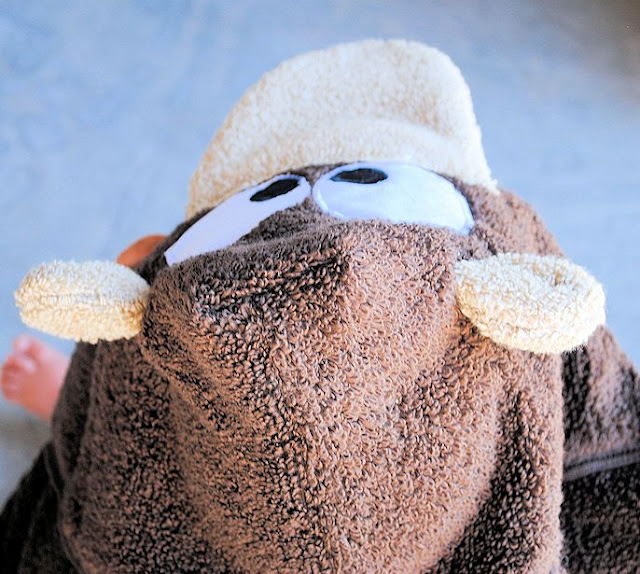 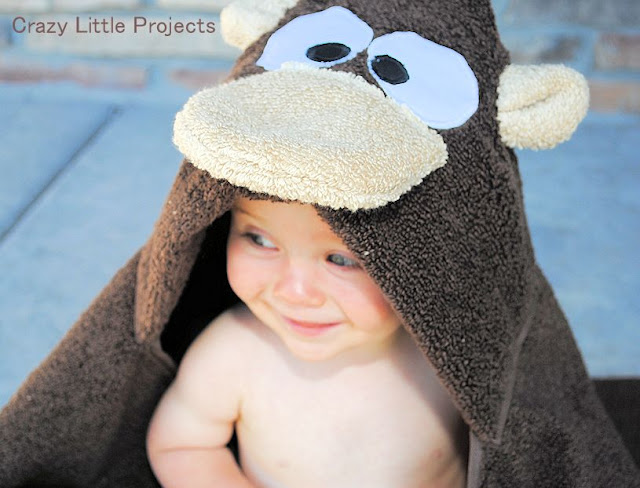 Now, be sure to check out the Ladybug and the Frog as well! 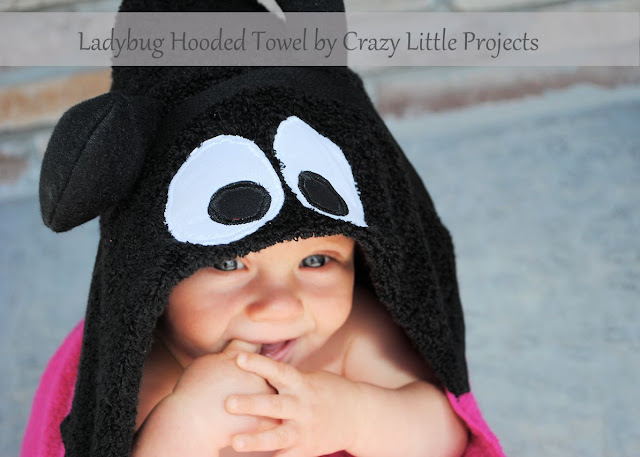 Next month I am thinking Dragon hooded towel. What do you think? Follow me on facebook, by RSS Feed or on Pinterest to get the lowdown on each month’s towel and other projects!
Linking up here

You can also find me at my new site: https://amberaprice.com 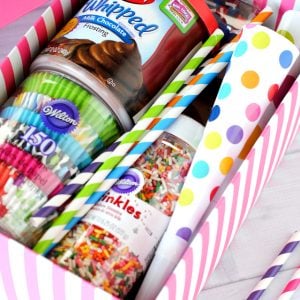 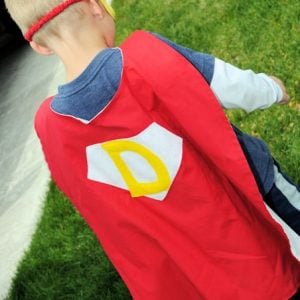 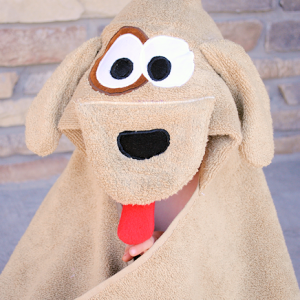