What’s the Project? These superhero hooded towels are going to be a favorite of your kids! Follow this easy pattern to make a Superman towel, Batman, or Captain America. They work great for babies to older kids.

So when I made these 3 superhero hooded towels my boys got pretty excited! I had planned to give these away because we have plenty of hooded towels around our house, but these boys commandeered them instantly and I don’t think I can pry them away. 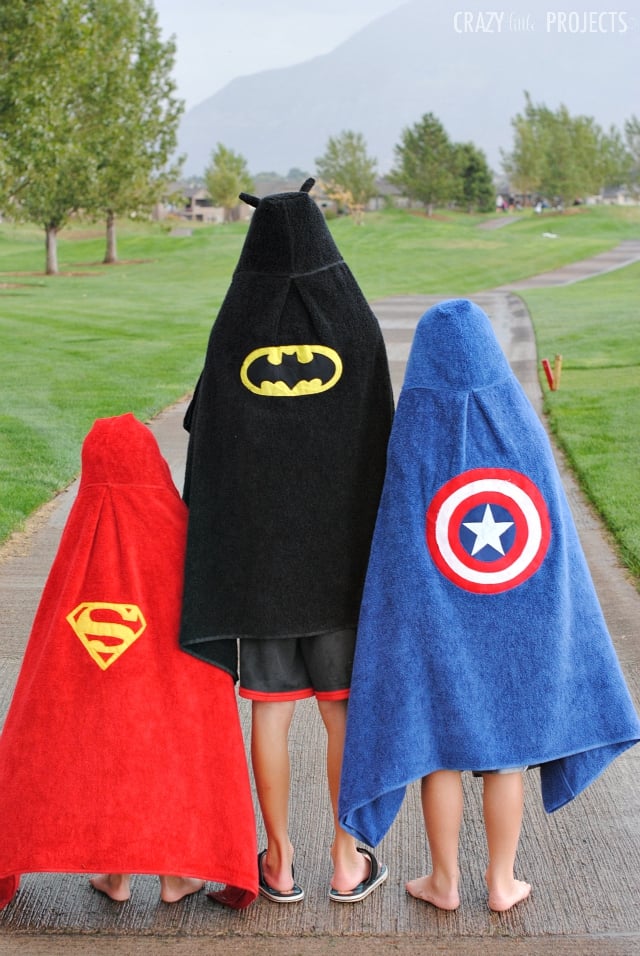 So much fun! And really, I did a Batman towel, a Captain America towel and a Superman towel, but you can do any hero you want! This will just give you some ideas and then you can run with it! 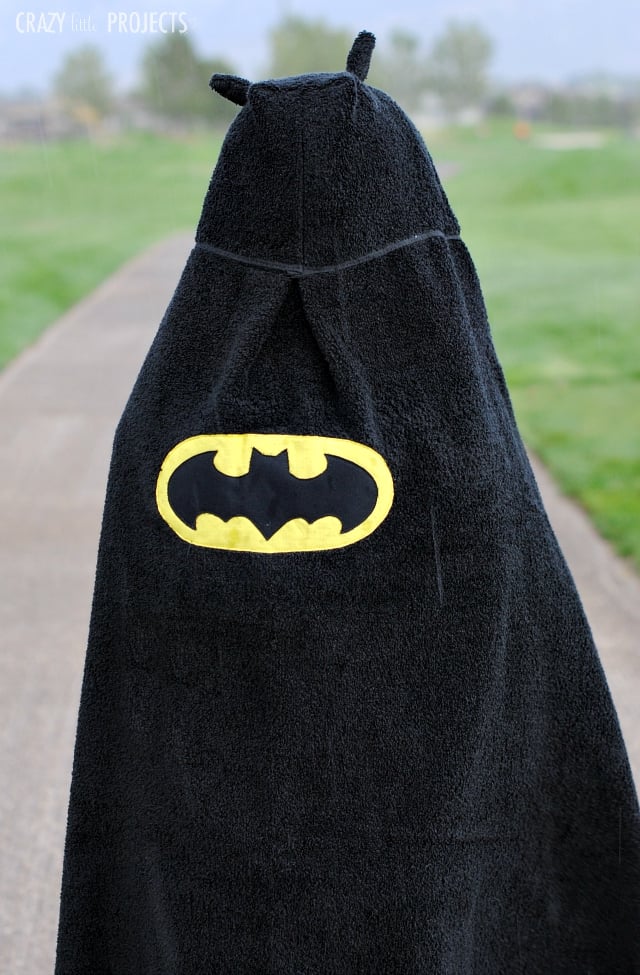 To make the basic hooded towel I will refer you to this hooded towel pattern. I am just going to teach you here how to make it Batman.

First, run a quick google search for the batman logo. (I am not going to give it to you here because of copyright.) Print off the bat.

Cut the bat from black fabric and cut a slightly larger oval from yellow. Using those pieces as patterns, cut matching pieces from the Heat n Bond. Iron that onto the back of each piece and peel off the paper.

Iron the oval to the towel where you want it and then add the bat on top of that.

Now, I usually do a zigzag stitch when I sew pieces/logos onto my hooded towels, but with these intricate details, I just did a basic straight stitch. Just know that the edges will fray without a zigzag stitch, so you need to stitch as close to the edge of your design as possible to keep the fraying down.

Sew around both the oval and the bat.

Now, for the bat I added little bat ears at the top. To do this, cut 4 small triangles from your hand towel (the extra half).

Sew each triangle around the two sides but leave the bottom open. Turn right side out.

In your already sewn hood (again, refer to the hooded towel tutorial to see how to make this), cut two small slits in the top where you want the little ears. Slide it down in there and then sew the opening closed catching the ear pieces in it too: 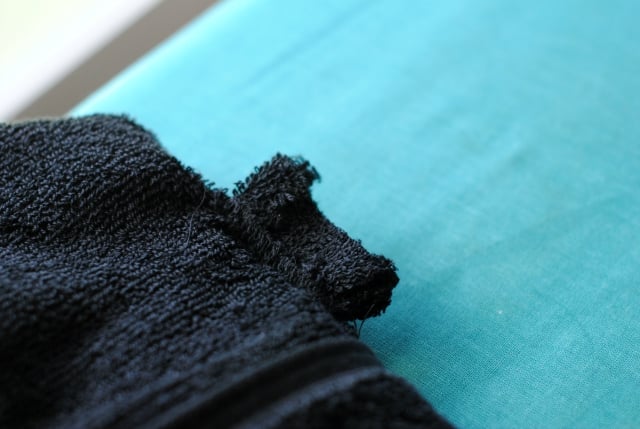 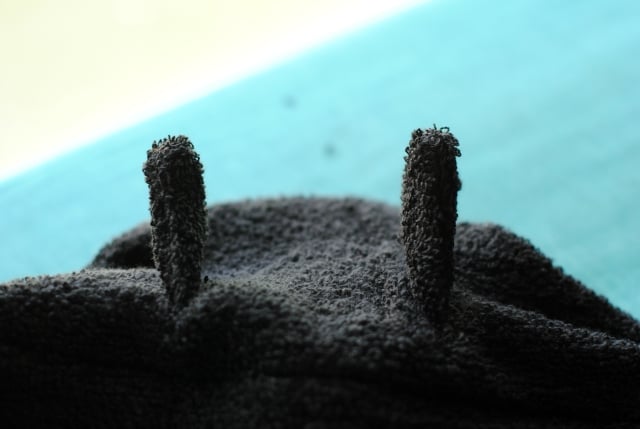 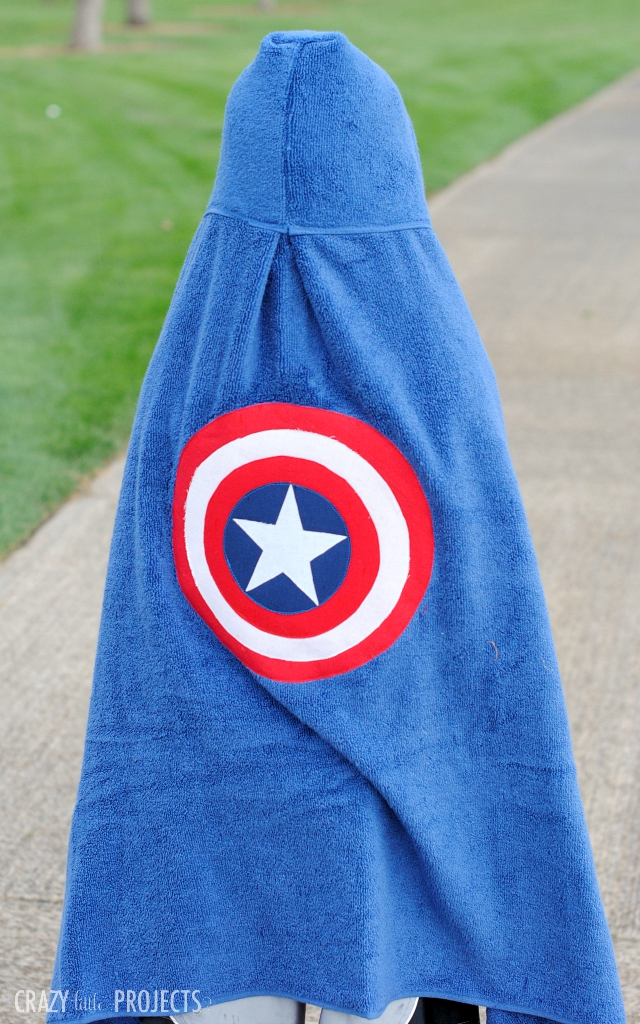 Again, use the basic hooded towel tutorial to make the towel part of this. Then, this one is pretty simple to make.

Cut the pieces from the pattern. The center star is white, the middle circle blue, then red circle, white circle and then do one last red that is slightly larger than the white one. (I can’t easily fit that on a page.)

Follow the same instructions as the batman towel to sew the logo on. Iron the pieces in place and then stitch very close to the edge: 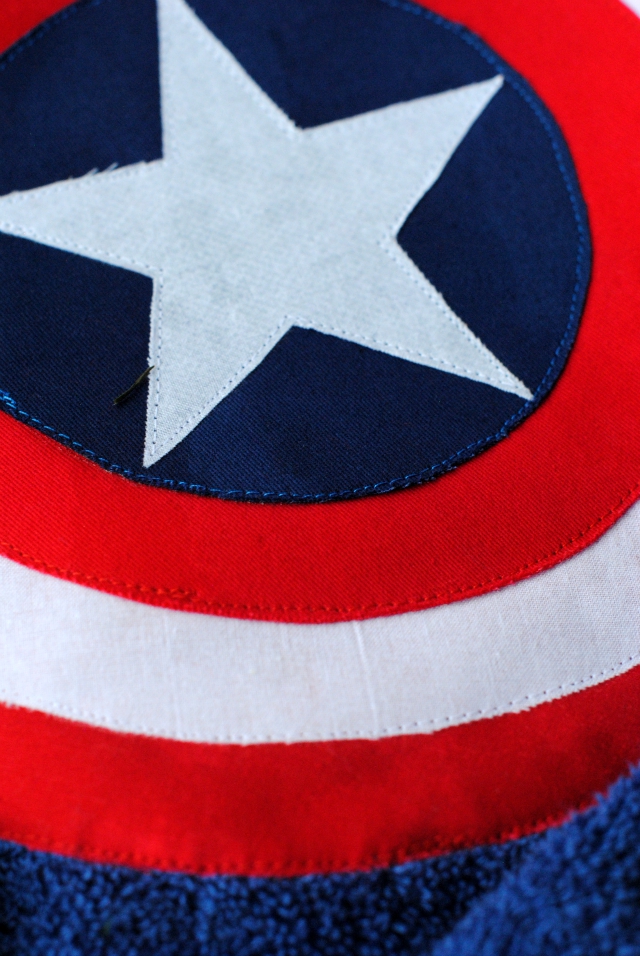 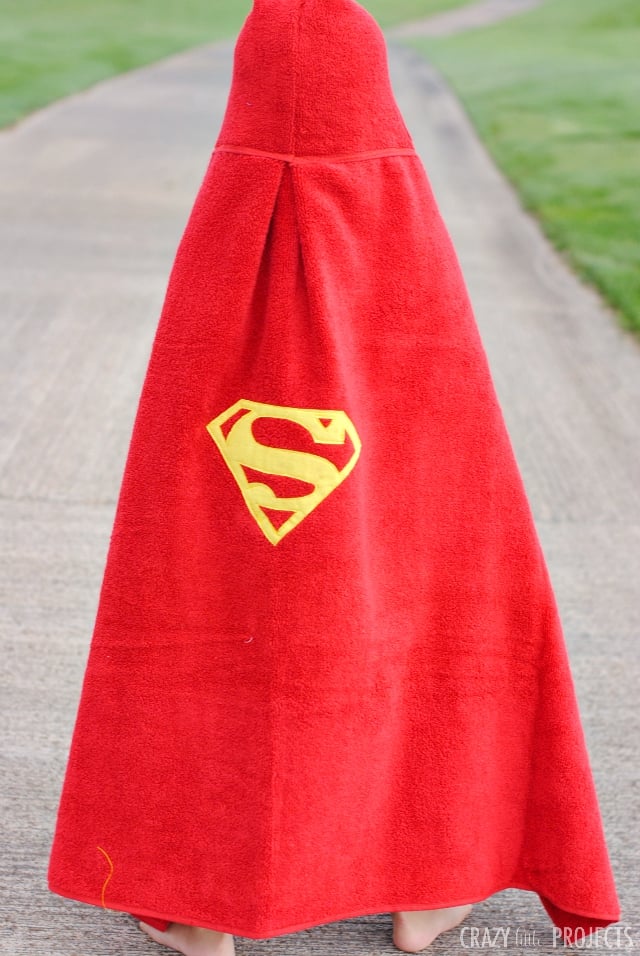 Again, for this one just run a google search for the logo. Cut it from yellow fabric (I did this by pinning the yellow fabric on top of the printed logo and then using the pattern that way.

Iron it in place and sew it on in the same way described in the above two patterns.

I hope you have fun with these! 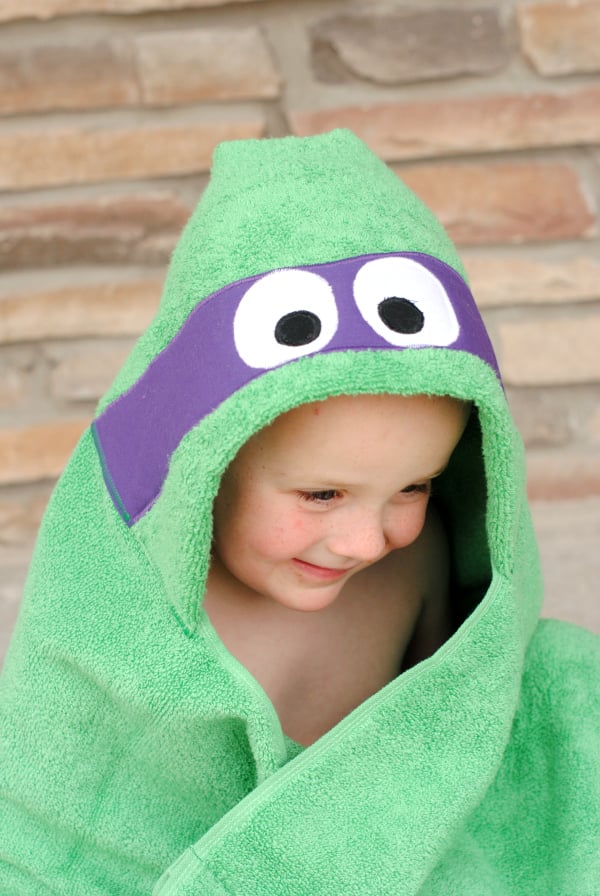 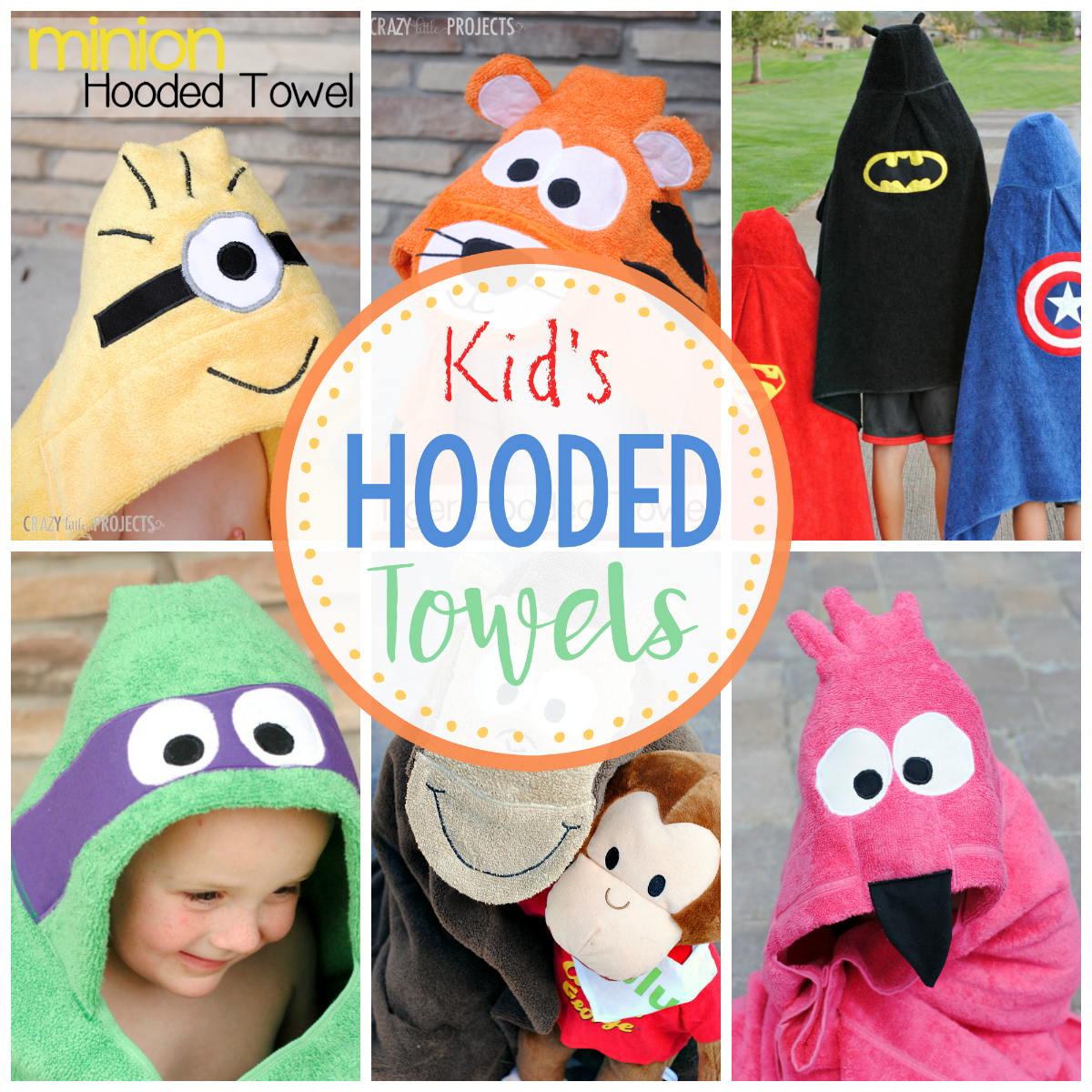 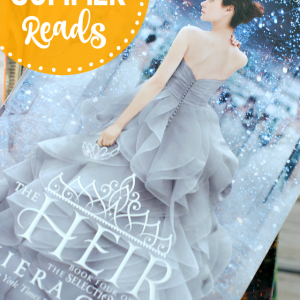 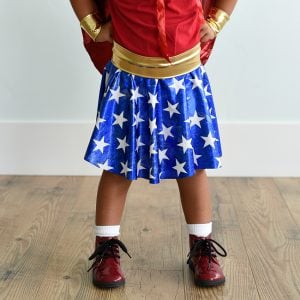 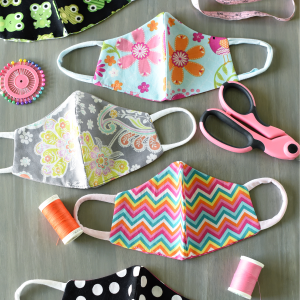 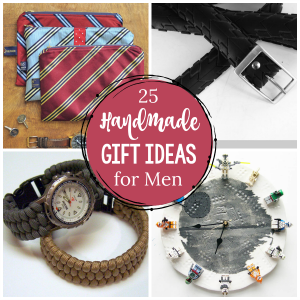