My 3 year old son’s bedroom is decorated in really bright colors and has a monster theme, so I wanted a bookshelf that I could customize to the colors of the room. Most stores don’t sell lime green bookshelves, so when I saw the idea to use unfinished wooden crates on Pinterest I knew I was on to something.

This is what I created: 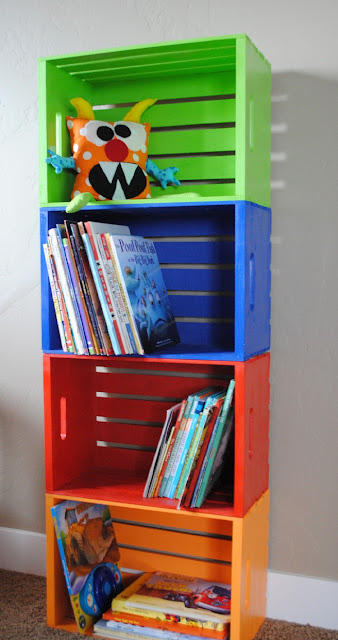 I love how it turned out! Here’s how to do it yourself:

At Joann or Home Depot (I hear they are $3 cheaper at Home Dept) you can buy unfinished wooden crates. They cost around $10. 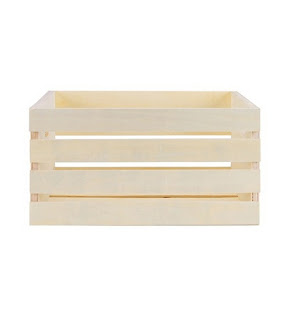 (If you are shopping in store for these, I recommend looking for ones that have the label on the side stuck on with sticky stuff rather than glue. Three of the crates I bought had labels that were glued on and impossible to get off, the other was just stuck on and pulled right off. If I had known ahead of time I would have checked them before buying them.)

Then I went to Lowe’s and bought paint in my color palette as well as spray finish. The paint I used was in the sample size containers of Valspar or Olympic. You could also use spray paint.

Then it’s as easy as painting the crates whatever color you want them. You could also stain them if you prefer. (I have seen some nice versions done in black, that may be my next project…) It took several coats of paint to cover them as thoroughly as I wanted. After they dried I spray finished them several times as well.

The trickiest part of this project was putting it all together. I ended up buying some very small screws and screwing them into the “roof” of each shelf. So that it goes for example into the top of the orange crate and up through the bottom of the red but doesn’t poke all the way through the red.

If I was doing it again I would try liquid nails. I have had readers try that and it worked great for them!

Another option would be to screw the crates straight into the wall or to put a piece of wood behind them and screw them into that.

I am very happy with the result and my son loves it! And all of his monsters!